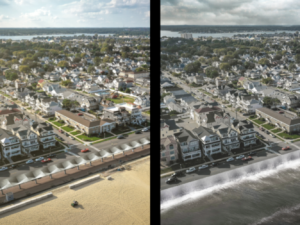 Traditional forms of armor are relatively low in cost, but they are frequently associated with numerous adverse social and environmental consequences such as unattractive, restricting public access to beaches, fostering a false sense of security, and adversely affecting the natural ecosystem. An innovative structural system, kinetic umbrellas, are designed for hard countermeasures against nearshore hazards. The system is inspired by the works of Spanish-Mexican master builder and artist Félix Candela. The typical concept of an umbrella is modified to incorporate a hinge at the vertex, allowing the umbrella to tilt from its initial upright position. The kinetic umbrellas are intended to remain in their upright position during normal operation, providing shade and shelter along the waterfront while not limiting access to the shore (left). The deployment of this defense system through its transition into a conventional floodbarrier is only initiated during imminent hazard scenarios (right). An animated video of the umbrella shows its potential effect.  Experiments will validate complex nonlinear numerical models.

This project has captured media attention, where articles have been written as follows: